Venkat Rangan, Founder & CEO On 8 November 2016, at 8.15 pm, India was jolted out of its early winter reverie by a sudden, completely unexpected announcement by none less than Prime Minister Narendra Modi. The Govt of India had announcement a demonetization of the popular 1000-rupee and the 500-rupee currency notes. This was an unprecedented move that was intended to curtail the shadow economy and reduce the use of counterfeit cash to fund illegal activities.

Minutes later, millions of Indians stood in serpentine queues to draw cash in the now only legal tender available—the 100-rupee note. As theories surrounding the demonetization and its effects began to surface, two Indian organizations saw a silver lining in the cloud of growing chaos. One was Kotak Bank, one of India’s largest private sector banks, with assets exceeding $30 billion. The other was a 13-year old maverick software firm from Chennai called Market Simplified.

A little over a decade before Modi’s announcement, a motley group of friends were locked in a brainstorm. Their attention was on a critical problem—the lack of a simple, practical way to check their diverse financial portfolios. They decided to create a product of their own to solve this very problem. One of these friends, Venkat Rangan, was prepared to bet that mobile phones would be the future. He believed that they would eventually become necessities. This was in 2005, when mobile phones were mostly clunky toys for the rich.

"We are capable of retaining customers since we understand the financial services domain, that’s where our ‘Experience Engineering’ plays a significant role as an amalgamation of user experience, functionality, and technology"

A man of action, Venkat brought together nine of his friends and incorporated a software development firm named INXS Technologies. INXS was not just another IT company building enterprise software. Their product, Market Unified, allowed subscribers to view and control their entire financial portfolios through a unified portal. Venkat intended to shake up the still-nascent fintech sector, where he saw untapped potential to add value to customers. Soon INXS had the attention of the industry and finally hit pay dirt with their first big offshore client—TD Ameritrade.

In 2008, INXS delivered a mobile trading application for TD Ameritrade, one of the largest trading houses in the US. Ever since, the company’s journey of delivering retail mobile financial services has continued on a global scale, bringing in a stream of clients who saw huge value in INXS’s expertise.

Flying High in a VUCA World

In 2008, the world was hit by a financial crisis, and banks were the first to feel the heat. Hugely volatile market notwithstanding, INXS launched a public beta testing platform on AWS. To stay safe from the meltdown, they focused on working with brokerages and institutional investors as creative technology consultants.

In 2009, Market Simplified helped the National Stock Exchange launch the first ever mobile trading app in India. Then in 2010, an important opportunity came knocking. Kotak Securities, the parent firm of a group of financial institutions in India, approached INXS to develop a mobile trading app. Upon its successful delivery in 2011, Kotak Securities was impressed enough to refer INXS to its subsidiaries—one of which was Kotak Bank.

We are assisting banks to become customer-engaging platforms, rather than just transactional entities

In an increasingly complex world of fintech, simplifying financial information was the need of the hour. With this challenge as a guiding philosophy, in 2011, INXS underwent a transformation. And was rebranded as Market Simplified. In 2013, Kotak Bank became a key client of Market Simplified. Three years later, to capitalize on the demonetization saga of 2016, Kotak Bank released a solution built by Market Simplified, called 811, a nod to the date that would be the turning point for many.

811 was an onboarding and banking app that would eliminate the need for bank visits and paperwork. Customers would be able to use the app to create zero-balance savings accounts at any time of the day, and go from no account to successful first transaction in less time than it took to make a cup of coffee. The app was a runaway hit. Kotak Bank’s user base nearly doubled in 18 months, with the app hitting close to half a million downloads within a few weeks of release paving the way for a surge of banking in a new way. India has since greatly increased digital transactions, which shot up from 94.7 million in 2013-14 to over 720 million in 2016-17. In 2018, it reached a peak of $2 trillion in value.

Looking Back with Pride

Since 2005, Market Simplified has onboarded several banks, brokerages, and financial institutions across various countries and continues to work with its earliest clients even today. “We are capable of retaining customers since we understand the financial services domain, that’s where our ‘Experience Engineering’ plays a significant role as an amalgamation of user experience, functionality, and technology,” explains Venkat Rangan, founder & CEO, Market Simplified. 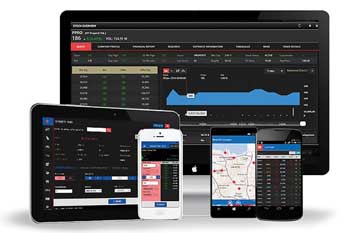 Today, Market Simplified works with several leading financial institutions in the US, Singapore, and India, including reputed names such as Currenex (State Street), Charles Schwab, MayBank, India’s National Stock Exchange, and many more. For State Street, the company has built a foreign exchange trading platform that was nominated for Europe-based awards.

Over the years, Market Simplified has also won several accolades, such as the Barron’s Rating Awards, for its trading app experience. In fact, most of their apps for US brokerages have consistently got a 4.5-star rating over several years. Recently, it became part of the NASSCOM Emerge 50 Awards, and was also named one of Asia’s fastest growing digital banking companies.

“There are multiple banking platforms and solution providers out there, but the way we onboard customers is what sets us apart. We understand what our client banks are trying to achieve through digital channels such as mobiles, connected devices, and wearables,” says Venkat. He goes on to add, “We are assisting banks to become customer-engaging platforms, rather than just transactional entities. Banks seek to drive better relationships with their customers, and we empower them to do so while helping their clients make important financial decisions.”

Over the years, Market Simplified has acquired a reputation for creating unique solutions that are highly appreciated by its clients. As Kountinya Sai, CMO, Market Simplified puts it, “We help banks to develop their mobile banking applications natively, or by employing a mobile development platform to ensure a vastly improved user experience.

By customizing each app to best suit out client’s need, we are definitely not a one-trick pony. I believe that our ability to recognize, understand, and develop sharp and customized apps has not gone unnoticed by the industry.”

Market Simplified believes in pushing limits to leverage its thorough understanding of its environment. With a focus on offering the best possible solutions to financial institutions, it has created digital engagement platforms for a multitude of banks and brokerages, gathering a rich multi-market experience.

“Digital banking is about remodelling financial services into a knowledgeable, transparent, and responsive engagement within a seamless ecosystem,” says Prashanth Ganpath, COO, Market Simplified, “And this ecosystem could also include a whole gamut of service providers and vendors who can be intertwined in this relationship for a wholesome experience.”

Committed to a Future of Innovation

With the vision of building a rich, contextual, and beneficial relationship between the banks and their customers, Market Simplified is building tools to manage customers’ health as well as their wealth. Venkat, a regular marathon runner himself, believes health and fitness should be aligned with an individual’s financial goals. The company is thus working to bolster banks’ relationship with their customers by initiating significant investments for the same.

Market Simplified has built an application, which leverages deep learning and AI—an attempt to bridge the gap between the need for innovation and the actual initiatives taken in this regard in the fintech space. Another effort in this direction is their discovery platform that has been developed using augmented reality, virtual reality, biometric automation systems, and multi-model analytics. Initially intended for fintech start-ups, Market Simplified has launched this platform for banks to help them leverage advanced cross-domain technologies.

According to Hiran Ramankutty, Chief Technology Architect, Market Simplified, “As fintech enablers, we have been creating new businesses/customers for banks, wealth managers, and AMCs, which were traditionally not possible. Market Simplified has been leveraging cutting-edge technology and social media adoption to drive this.”

In addition to creating such business opportunities for organizations, Market Simplified treasures its open and vibrant work culture that has been nurtured by the leadership for 13 years, which defines the company’s core values. Some of its key executives are not just brilliant minds but are helping the organization create and nurture a creative soul. For instance, Raghavan, the Chief Experience Engineer is also a yogi. Toggling between bursts of high creative energy and periods of deep calmness, he’s a ‘tech monk’—a practitioner of extreme yoga who lives and breathes technology.

Praveen Kumar, the Chief Evangelist at Market Simplified is another senior executive who has uncanny way of understanding both technology and clients’ minds. Praveen is deeply interested in entomology and bionics and loves being an organic farmer in his free time. Steve Mendel, is the Chief Sales Officer who brings a sense of adventure to the whole organization. Steve is an avid biker who has clocked over 100,000 miles on his trusty Harley Davidson, all across America. A passionate sales veteran, he loves creating and building strong client relationships on mutual respect. Steve is always focused on milestones. Whether it’s a sales figure or just another signboard on Route 66.

Each leader brings with him solid expertise and a vibrant energy that cascades through Market Simplified. And this is one company that knows to keep its employees firing on all cylinders. There’s a lot at stake. As banks join the fray and the $7 trillion fintech sector gets crowded, Market Simplified is getting ready to take on the challenges head on, and win. After all, it’s in their genes to constantly innovate and simplify the way forward.